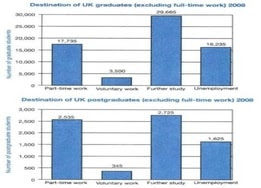 Th purveyed bar charts delineate the path chosen by British graduates and postgraduates who did not opt for a full-time job post finishing their college studies in the year 2008.
Overall, it is apparent that the majority of educatees of both groups decided to continue their studies after completing their previous degree whereas only a handful of them chose to do unpaid work (volunteer work)
It is noticeable from the given statistics that there was a huge disparity between the total number of graduates and postgraduates. It is noticeable that 29665 graduates went for (started doing) further studies which were around elevenfold higher than that of postgraduates who preferred to do the same. Part-time work was the second favourite choice of both graduates and postgraduates and the figure for part-timers was 17735 and 2535,
respectively
The number of students who started doing unpaid work was the lowest in both groups. This figure was 345 for post-graduates and 3500 for graduates A little more than 1600 students could not find any job after finishing post-graduation which was tenfold less than unemployed graduates

1 thought on “The charts below show what UK graduate and postgraduate students who di not go into full-time work did after leaving college in 2008. Summarise the information by selecting and reporting the main features, an make comparisons where relevant”