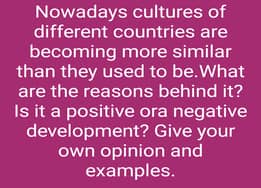 It is a fact that differences between different cultures are vanishing as people’s behaviour and beliefs are becoming identical. There are several precursors that have brought about this change and as per my viewpoint, it is harmful to society
at large

To begin with, the root cause behind this transition is globalization. As the world has
become a global village, people are transcending national frontiers for working and studying in other countries. When people relocate to other countries, they mix up with natives and start following the traditions and beliefs Consequently, immigrants become detached from their roots. Another reason is the internet Millennials, nowadays, rather than watching the cultural shows of their own region, prefer
watching western shows as these are more exciting. For instance, in India, the craze of attending folk shows and traditional fests is declining whereas the popularity of video
streaming websites such as Netflix and Amazon
prime is rising. As such shows have a great influence on people’s mindsets, they get impressed by the new things of other cultures and start questioning the validity of their own traditions and beliefs.

There are severe implications of this phenomenon in many societies. The primary disadvantage is the loss of cultural diversity. As people are getting farther from their culture, the moral values and ethics associated with different cultures are also dying. For instance, in India, it is a long-held tradition that children are expected to touch elderly people’s feet but kids nowadays feel ashamed of doing so as they feel it is uncool. Additionally, in the long term, this can be devastating for the hospitality and tourism sector. Presently, holidaymakers travel to different parts of the world to experience different kinds of traditional foods and customs of people. If everyone starts following the same culture, people will be uninterested in exploring other places.

Having discussed the topic in detail, I conclude that globalization and the prevalence of the internet are the major causes behind this trend. This phenomenon is harmful to people as cultural diversity is dying

1 thought on “Nowadays cultures of different countries are becoming more similar than they used to be.What are the reasons behind it? Is it a positive ora negative development? Give your own opinion and examples.”