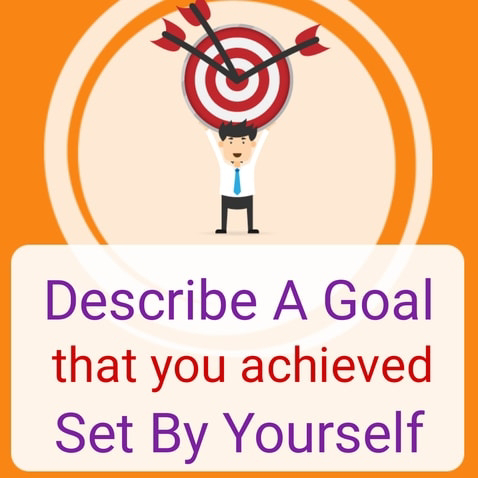 Describe a goal that you achieved which was set by yourself

Well, I am goal-oriented. I have achieved many objectives in my life. Attaining a goal provides me with an interior fulfillment and I realize very proud of myself when I achieve any goal. here I would surely talk about a goal which I achieved when I was in secondary school.

Actually, after completing my 10th grade, I chose physics, chemistry, and maths subjects for my further education. I was good at physics and chemistry but was very weak in mathematics. I used to get very fewer marks in mathematics. So, my parents were worried about that.
My parents wanted me to attain good marks in the final examinations and I did not want to hurt them. After that, I made a goal to achieve good marks in mathematics. I started preparing for my exams and took tuition classes. I lent plenty of time towards mathematics.
Finally, the day arrived and I performed well in my exam. The results were supposed to be declared after 2 months from the daye of examination.
When the results were declared I was on cloud nine because I cleared the exams with flying colors and scored very good marks in mathematics.
My parents were very happy and they complimented my hard work and dedication. My parents threw me a little party at my home at they invited all my friends. We did a lot of fun and danced together.
Overall, that was the achievement that I accomplished with endeavor and devotion.

By burning midnight oil, anyone can achieve whatever he wants. There are many successful people who have attained many things by working hard. I have also achieved many things in a similar way. One of my goals was to reduce stage fear. It is the incident of last year. I don’t know what happened to me, one day, I just decided to conquer my all fears. Stage fear was one of them. In order to reduce it, I decided to take part in the extempore competition. In this, the candidate is required to give a speech on the topic given there and then. I knew that I was not good enough to win that competition because I could not talk on the topic without preparations, but as I already said my goal was not to win the competition but to reduce my stage fear. It really needs guts to speak on stage in front of everyone.
I decided to do so. Thus,  I gave my name to the competition. Just before the starting of that contest, I had cold feet. It became difficult for me to continue it and I was thinking of giving up. That time I recalled all those times when I tackled my hurdles and achieved my goals. My friends also encouraged me by saying that it is OK to feel nervous but giving up should never be an option. That time I gathered courage and decided to give a speech on the stage.
Although I was a little bit nervous when it was my turn, I tried my best. Even though I didn’t win the competition that day, the goal of a removing stage fear was accomplished which I set for myself. It influenced positively in my life and now, I don’t feel fear in doing public speaking
Next cue card

cue-card: describe a person who has apologized to you, sample answer

5 thoughts on “cue-card: describe a goal that you achieved, sample answer”