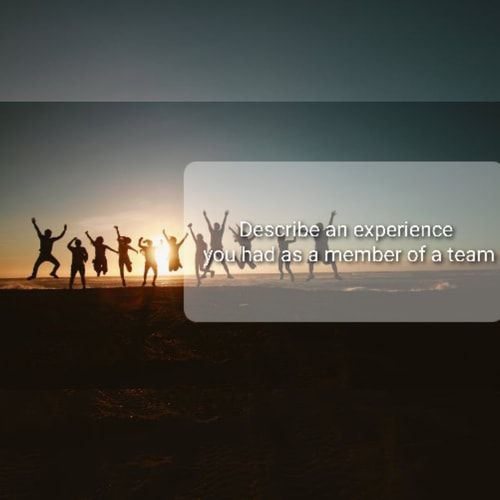 Describe an experience you had as a member of a team.

Well, when I was in school I took part in many contests and became a member of many teams. I have had many experiences as a member of numerous teams but here I am going to talk about a blissful experience when I took enrolment in a project making competition.
I vividly remember that I was in my 10th standard. My school authority organized a project making contest. Even though I was not good at this skill but I preferred to take enrolment. Finally, our class teacher confirmed the names of the final participants and fortunately, my name was on that list.

All other participants are my acquaintances, so it was not difficult to collaborate with them. We all initiated discussing the project and finally, we decided to make a project of a windmill.

All the duties were assigned and the onus of collecting material was on me. I went to a nearby market and purchased all the necessary equipment. One of the members of our team made a blueprint of the project. Moreover, my friend Harman made an assignment to explain the project.

Finally, the day arrived, we had only 2 hours to build this project from scratch. We began making the project according to the blueprint. When the last 10 minutes were left, we finished that.

When the judges came, we explained the project and then proved them, how it works.
The results were supposed to be declared on the next day. Eventually, our project got the second position. Our names were announced and our school principal appreciated our work.

Overall, that was the experience that I had as a member of a group during my school days.

Playing solo is really easy because we don’t expect others to help us and we can use our own ways as well as ideas to implement plans, whereas playing or working in a team requires people skill. There is a chance of conflicts because of contrasting ideas. Fortunately. I had a positive experience when I worked as a member of a team. Last year, it was collage making competition in our college. I really wanted to take part in that competition.
I convinced two of my friends to accompany me because it was a team project. My one friend selected pictures for the collage whereas others decorated it. My role was to find relevant information and present it in front of the judges. The selection of the team was going to be on the basis of uniqueness, clarity of topic and presentation. Besides this, it must be completed within 30 minutes. Three of us gave our best in our roles. Apart from this, we were not allowed to borrow anything from others. If anyone forgot any major part of the college, that person was neither allowed to go outside to bring it nor could borrow from others. So, we were really careful about it and had everything with us. We completed our project in the nick of time. As the judges were coming towards us, we were getting nervous.
However, they were impressed by the choice of pictures and decoration. That time I took a deep breath and tried to calm myself in order to reduce nervousness. I gave my presentation confidently and our team won the competition. We were on seventh heaven after hearing the result. That was possible only because of our teamwork.

cue-card: describe a goal that you achieved, sample answer